The Universal Religion: Bahaism - Its Rise and Social Import 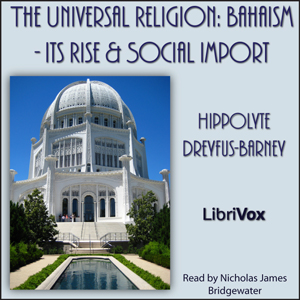 The Universal Religion: Bahaism - Its Rise and Social Import

LibriVox recording of The Universal Religion: Bahaism - Its Rise and Social Import by Hippolyte Dreyfus-Barney. Read by Nicholas James Bridgewater.

“Bahaism is not a new religion,” writes Hippolyte Dreyfus-Barney, “It is religion renewed… it does not pretend to represent the whole Truth; on the contrary, it recognises Truth in fundamental principles which are the basis of all former dispensations, and which for that very reason form the standpoint of concord too long lost sight of. And it requires people to renounce ancient superstitions, to abandon the dead letter in order to be penetrated by the living and vivifying spirit, then by that very means it confirms the original purity of their religion, whilst helping them to know and love everything profoundly beautiful in the others… it will suffice for me to indicate that the Bahais believe that from all eternity God has raised up among human creatures higher beings who have inculcated mankind with the great moral principles on which societies are founded, and have thus been the supreme guides of its evolution.”

Hippolyte Dreyfus earned his doctorate in law in February 1898 and became the first French Bahá’í in 1901. In 1903 he gave up his legal career to devote himself to oriental studies. He enrolled at the École pratique des hautes études university in Paris, where he studied Arabic and Persian to be able to translate the Bahá’í writings into French. He was one of the only Western Bahá’ís of his generation to received such formal training. He was the author of numerous books, articles and translations of the Bahá’í faith. Dreyfus-Barney attained in September 1902 with an American Bahá’í, Lua Getsinger, an audience with Muzaffaru’d-Din Shah in Paris. During this meeting the Shah was personally handed a petition to protect their co-religionists in Iran. After his marriage (1911) with the American Bahá’í Laura Clifford Barney, he adopted the name Dreyfus-Barney. He also traveled to numerous countries and represented the Bahá’ís in legal disputes. He died on 20 December 1928 and was buried in the Montmartre Cemetery in Paris. He was posthumously appointed by Shoghi Effendi as one of the 19 Disciples of ‘Abdu’l-Bahá. Please note that the term Bahaism is no longer used by Bahá’ís. The appropriate term is the Bahá’í Faith.

Uploaded by librivoxbooks on November 5, 2010